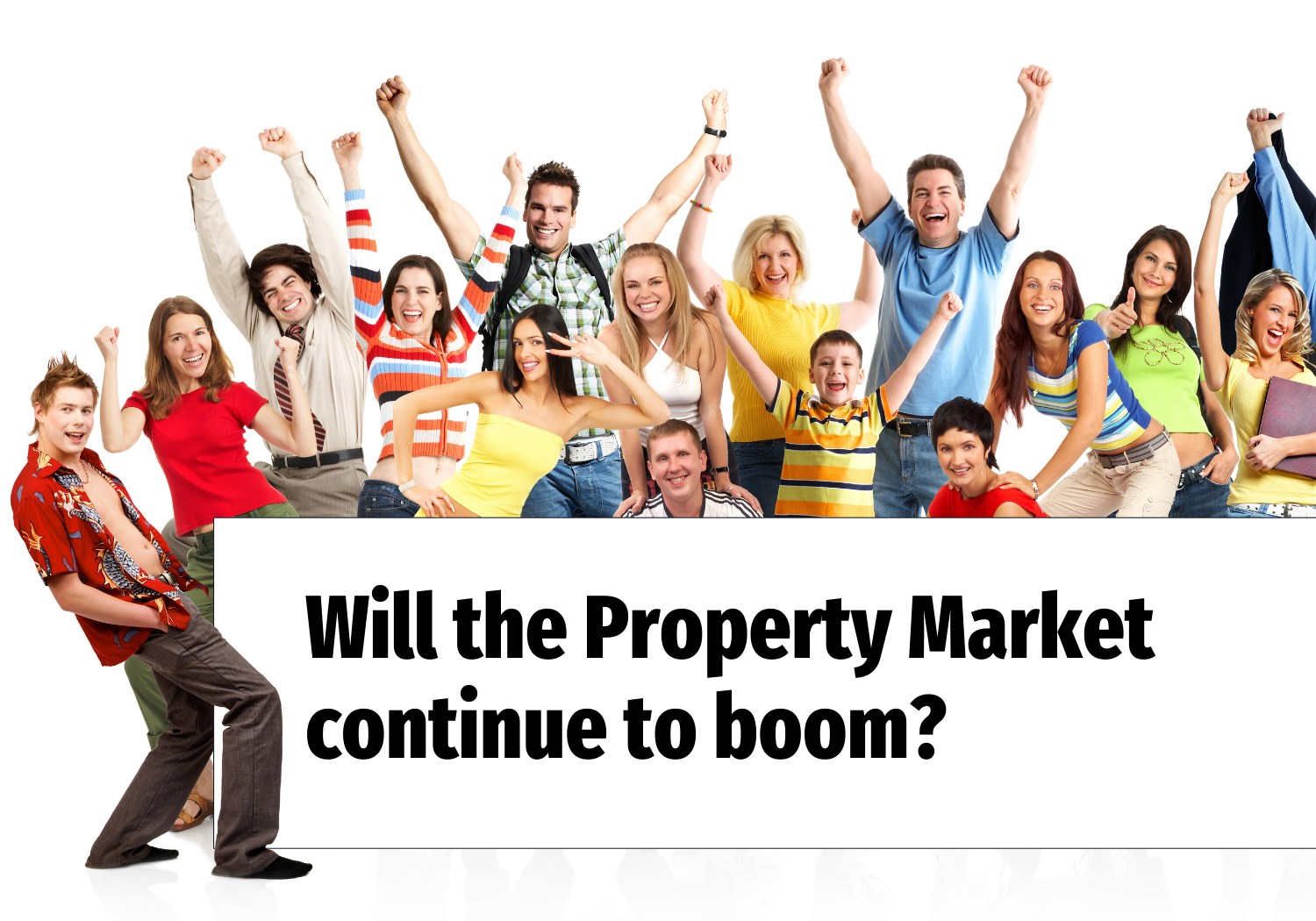 20 May Will the High Wycombe Property Market Continue to Boom?

All the signs are that the High Wycombe housing market is sat on good foundations, yet one key hazard could still scupper the market.

‘UK Property Prices Rising at Record Levels’ is the headline of many newspapers. In the last few weeks, the Halifax reported they had grown by 6.5% in the last 12 months, whilst the Nationwide said 7.1% and not to be outdone, the Government’s own Land Registry said 8.6%. Nothing new there then you might think, don’t UK house prices always increase?

Actually, they don’t, as many High Wycombe homeowners will remember 2009, when they dropped by 19%. Also, some more mature High Wycombe homeowners will remember the early 1990’s where house prices dropped just over 40% over 4 years (after the 1989 property crash). So, the increase in UK house prices over the last 12 months has mystified all the forecasts made by most economists as …

house prices were forecast to drop during the pandemic because during the previous six UK recessions experienced since WW2, house prices have always fallen sharply in real terms.

Yet 2020 was different with house price growth increasing at its highest rate since 2014 as the substantial Government support programmes (including Bounce Back Loans, grants and furlough) has mollified the hit to household incomes. Add to that the pent-up demand from the Boris Bounce, all the people working from home wanting an extra room for an office and therefore needing to move, plus the stamp duty holiday, with the cherry on the cake of 0.1% Bank of England interest rates keeping borrowing affordable. This has meant …

High Wycombe property values are 5.9% higher than a year ago.

Yet the affordability of property is a big issue going forward. By the time of the height of the last property boom in 2008, the national ratio of average property values to earnings had risen from 5.1 in 2000 to 8.8 (i.e. the average house price was 8.8 times the size of the UK’s average person’s annual earnings). We then had the property crash in the proceeding years, and the ratio dropped to around late six’s/early seven’s. However, over the last few years, the ratio has been steadily rising and now with the recent growth in demand for property (the five reasons mentioned in the previous paragraph), the ratio has now smashed past nine. Looking locally …

the ratio of average property values to earnings in High Wycombe 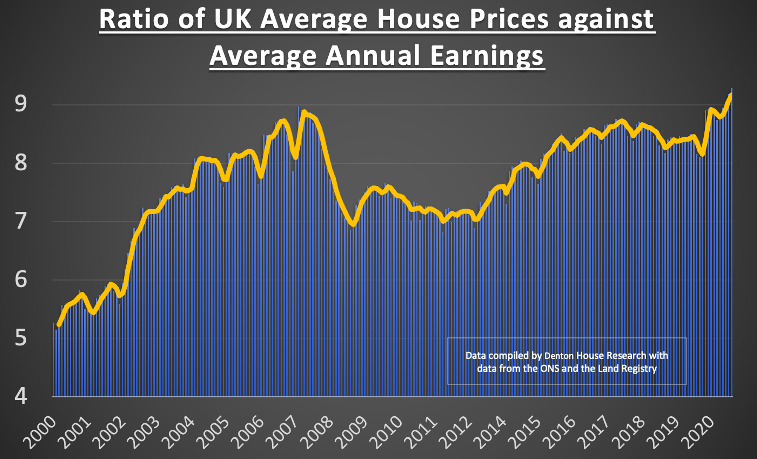 So, are we heading for another house price crash? Maybe, maybe not – because the House Price to Earnings ratio only tells us part of the story. Another indicator of the property market is mortgage affordability, which measures the proportion of mortgage payments to average incomes. For all mortgage holders, in 2015, this stood at 24.13% and today it is only just above the national long-term average of 25%, demonstrating that property is still affordable.

Yet, the life blood of the property market are first-time buyers. The long-term average percentage of income which goes on mortgage payments for first-time buyers is 33%. Just before the 1989 property market crash, this stood at 54%. Whilst just before the 2008 property crash, it reached 49%. Today, it stands at 31.7% (and the reason it’s so low, even with record high property prices, is low interest rates because when mortgage interest rates are low, this permits people to afford larger mortgages, which enables them to bid up house prices). 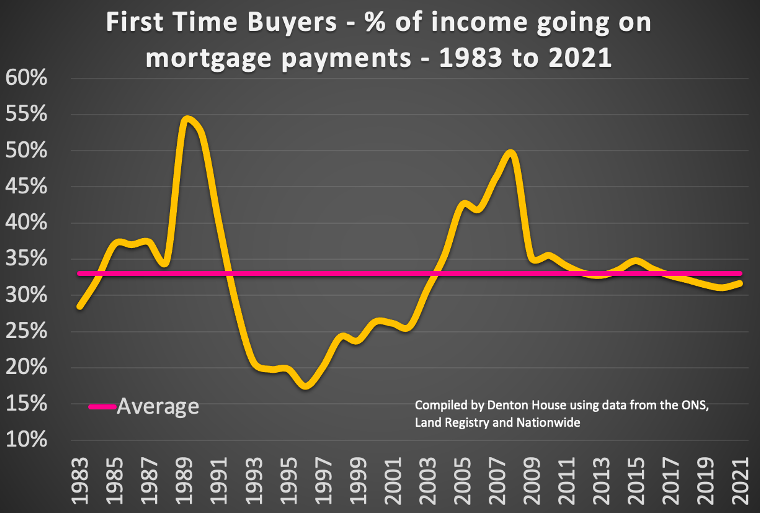 So why aren’t more first-time buyers buying more homes? Well in fact they are buying more homes. At the turn of the Millennium, just over half of 25yo to 35yo were homeowners and by 2014, this had dropped to just a third, although since then it has increased to 41%. Now with the reintroduction of the Government backed 95% mortgages in April, this demand will continue further.

Once furlough ends, unemployment will doubtless rise in the following 12 months, yet the economy is more than likely to be in a boom phase, so by the spring/summer of 2021, the unemployment rate should start to fall.

So, does everything look great for the High Wycombe property market?

Before you get the Champagne out, there is a cloud on the horizon – the possibility of higher interest rates.

Undoubtedly, for the next few years, interest rates will not go up (and if they do – it will only be nominally). However, down the line it may be a different tale. Interest rates are used to control a number of economic factors, one being the currency and secondly inflation.

As many suggest, if we get an economic boom in the next 12 to 18 months, as we come out of lockdown, this will put upward pressure on the price of goods and services. Normally, when prices go up (inflation), to ensure that inflation doesn’t get out of control, interest rates are normally increased to dampen down the inflation.

So, will interest rates rise? Undoubtably they will. High Wycombe homeowners and buy-to-let landlords should seriously consider protecting themselves with fixed rate mortgages (yet 3 in 10 mortgagees are still on variable rate mortgages!). I believe we will see some inflation in the order of 3% to 5% in the coming 24 to 36 months, yet the interest rates won’t be enabled to bring it down. We had a similar case in the early 2010’s when we had a mis-match of demand and supply of goods, and inflation spiked to 5%, before returning back to its long term 2% average quite quickly thereafter.

The Chancellor will also encourage some inflation to reduce the ‘real’ cost of the Billions he has borrowed because of the pandemic, yet won’t want to see interest rates increase to take the cost of the borrowing upwards.

If you are considering moving home or buying/selling a buy-to-let property in High Wycombe in the next 12 to 18 months, and want a chat about your options, don’t hesitate to drop me a line.

Finally, these are interesting times ahead – I would love your thoughts on this matter. Please do share them in the comments.